As soon as Kim A. Wilcox was chosen to serve as the ninth chancellor of the University of California, Riverside, he acted.

It was late July when he was announced as the chancellor-nominee, and Aug. 8 when he was appointed chancellor-designate. Eleven days later, he was already working on campus.

And he hasn’t slowed down since. Within his first four weeks, Wilcox had already visited each of UCR’s seven schools and colleges; toured student services; met with center directors; lunched with students; participated in meetings with industry leaders; welcomed international students; hosted a faculty and staff picnic; attended his first UC Regents’ meeting; spoken before the Riverside County Board of Supervisors; met with other elected officials; gone to a UCR cross-country meet; served as the keynote speaker for Good Morning Riverside; and driven to Los Angeles for a meeting of the NCAA Big West Board of Directors.

“We are a top-ranked research university with great students, faculty and staff. But our best still lies ahead. Together we are going to get there.”

That’s just a partial list. In between, he met individually and collectively with campus leadership, led two search committees and grappled with all the day-to-day issues that confront a chancellor.

The ease with which he hit the ground running was typical Wilcox. The former Michigan State University provost and executive vice president was lauded for taking immediate action — a trait his constituents appreciated greatly, and one that has served him well throughout his career.

Wilcox, who was also a professor of communicative sciences and disorders at Michigan State University, served as dean of the College of Liberal Arts and Sciences at the University of Kansas from 2002 to 2005, and as president and chief executive officer of the Kansas Board of Regents from 1999 to 2002.

Wilcox’s academic career began with an interest in communication disorders — a field that was “based on science but had a human element to it.” For Wilcox, working with children and their families in ways that made a difference to their lives — combining the science and research with the personal — was very rewarding. That same interest in the personal also led him to UCR.

“UCR has a unique combination of diversity and excellence. A first-generation student from a low-income family has the chance to learn through engagement in discovery, which is the very essence of a research university,” said Wilcox.

Public universities, he said, also feel a commitment to their communities and state economies. This ethos benefits everybody. “We want the Inland Empire to succeed as much as we want our freshmen to succeed. We want the state of California to be an economic dynamo as much as we want our seniors and graduate students to be successful in their careers. That’s what makes public universities unique — not just in America but in the world.”

And his impressions of Riverside so far?

“Never have I seen a community embrace its university to the extent this one does. In return, UCR is making a difference in our state and region — from our roots in agriculture to our new schools of medicine and public policy.”

He is also staunchly supportive of the campus’ strategic plan, “The Path to Preeminence: UCR 2020.” Yet Wilcox is realistic about what it will take to achieve the ambitious goals enumerated in the plan. “We have to challenge ourselves to do more. We are a top-ranked research university with great students, faculty and staff. But our best still lies ahead. Together we are going to get there.”

Given the pace Wilcox has established in his first weeks in office, it won’t take long to arrive. 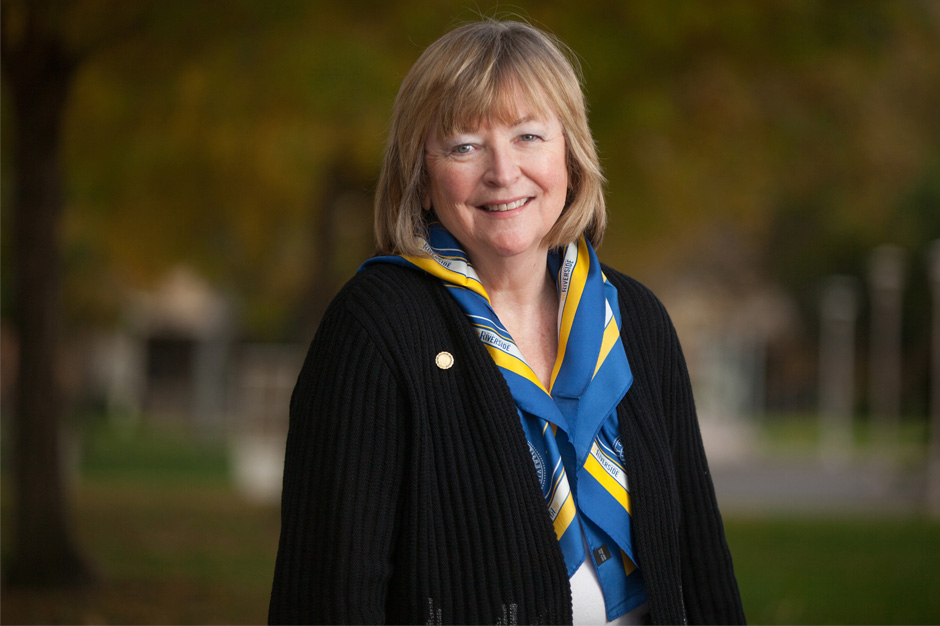 It was only seven months, but Jane Close Conoley made an indelible mark on UCR during her time as interim chancellor.

She was asked by UC President Mark Yudof to temporarily leave her job as dean at the UC Santa Barbara Gervitz Graduate School of Education and to see UC Riverside through a transition. Conoley quickly showed her wit and her wisdom at a welcome event held in January. A married faculty couple walked up to the podium (on separate occasions) to speak on differing sides of the issue of growing UCR faculty. “I’m a little worried about what will happen after this meeting,” she quipped, to a wave of laughter from the audience.

Her research specialty is counseling, clinical and school psychology. Her research and development efforts in school safety, teacher quality and student achievement have been supported by more than $20 million in external federal, state and private funds. By the end of her tenure, she was able to stand up and take a bow for getting the UCR School of Medicine across the finish line with its first class of 50 students. She was one of only five nonphysicians to earn an honorary white coat for efforts that earned UC Riverside ongoing state funding. In between, she managed campus affairs. She oversaw staff turnover; she represented UC Riverside in Washington, D.C., when the campus was named a “Next Generation University” by the Lumina Foundation; and she engaged with students, the community, the faculty and the staff. In recognition of her impact on the campus, the UC Riverside Staff Assembly gave Conoley an award of thanks at the annual Outstanding Staff Awards.

She loved her time at UCR and wrote to the campus community in regular emails. In her farewell missive, she said, “I have learned a lot, laughed every day, and worked harder than I thought possible.”

“Your permanent UCR Chancellor Kim Wilcox, is superb,” she added. “I could not be more enthusiastic and hopeful about the future. I’ll be watching from the lowlands for all the great things ongoing and to come from the Highlanders.”